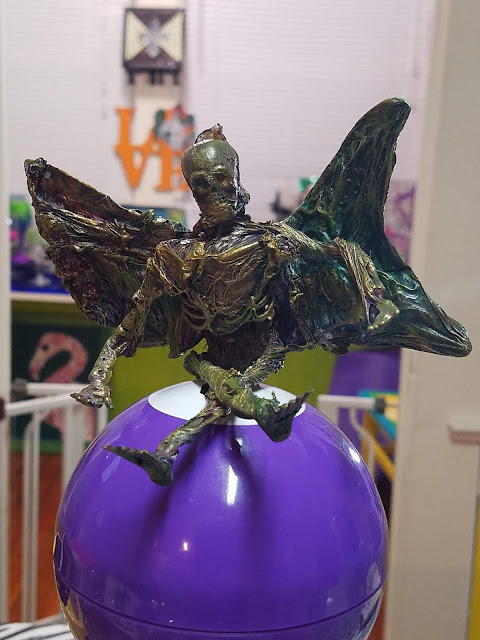 This is such a creepy, yet cool thing.
It is called Corpsing!
And it is actually pretty easy.

You can corpse a dead fairy with as little as $4. of supplies!

I offer a class during the Halloween Season called the Dead Fairy Workshop.
We use a miniature skeleton for this project.
But you can start off with any skeleton you can find, there are so many cool ones now. Michaels even has a mermaid skeleton ( I have to go get that one!).

Your other magic ingredient is a plastic shopping bag.

I add in wire to make the wings and several colors of paint.
Bronze (optional), Yellow Ochre, Raw Umber, Gold (optional), Green (optional) and Black.
You will also need a heat gun.

The first step is to add the wings to your miniature skeleton.
You can also heat up the skeleton and bend the legs and arms. Heat it up, bend it and hold it or tape until it cools. It will then stay in that shape. You can also just break the parts and glue them in a pose. 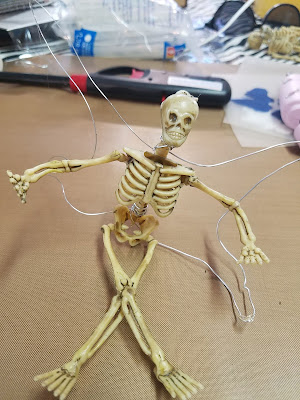 Next, you start adding the plastic garbage bags. This is a great way to recycle all those bags!!
I cut the bag open and just off pieces and begin to wrap them around the skeleton. You will use your heat gun to blast the plastic bag, causing it to shrink up tightly against the skeleton and wire wings.
It is ok if some of it melts or burns a hole because that just adds to the decomposing effect. 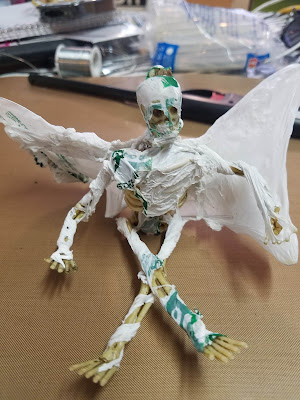 Keep adding the plastic bag until the whole skeleton is covered. 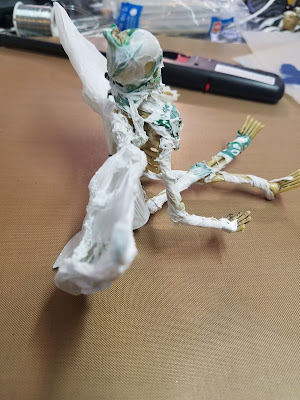 Once it is completely covered ( and this won't take that long), you can start to paint. Painting is my favorite part because this is where you really bring this thing to life... or death!

Start by painting the whole thing black. Get into all the nooks and crannies.
I wish I had photos I could show painting the dead fairy (I may add some from another dead project).

After the black paint dries, which could be just a few minutes. (You can even blast it with the heat gun.) You will paint raw umber on the creature. The raw umber painting begins the steps using a dry brush technique.

So a little about dry brushing. Dry brushing is where you put paint on the brush and kind of mash the paint into the brush. Then wipe off the brush on a paper towel. You want to remove the majority of the paint, keeping some of the paint that has been saturated into the bristles. You DO NOT want to see a wet brush. I know this sounds crazy...put paint on the brush, then wipe off the brush... but it really isn't. You want to be able to really push the brush down on the fairy and random paint comes off.

Ok, so now that the black is dry dry brush the raw umber on the fairy, You are not going to try to get all the nooks and crannies because we want to see the black underneath. You are catching the raised areas. This is when you start to see the ribs poking out here and there. You see the crazy strings of plastic bag that start to resemble skin....the creepiness is starting to be seen.

Next you are going to add the yellow ochre. Again, we are dry brushing. By going from dark to light you are really seeing the "skin" and it is starting to look decomposed.

Now you can add an even lighter color or a little gold or bronze to accent it. I mean, a decaying fairy might still have some gold or bronze on its rotting wings. I added a little green to my project to add to the rotting look.

Side note- I taught my husband this technique (and you know how they don't like to listen to your directions) and his bat came out amazing!!!

When you are done it may look like this. 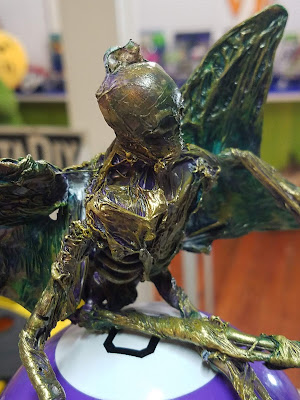 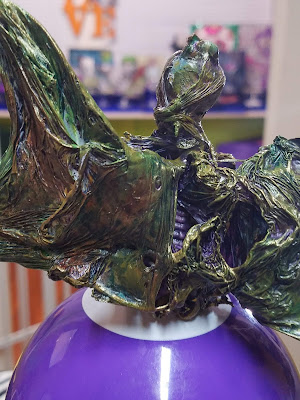 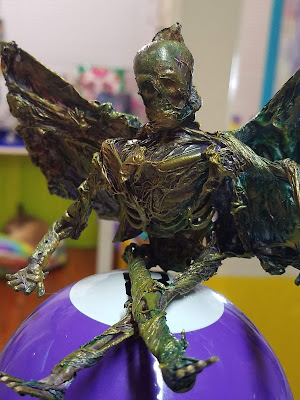 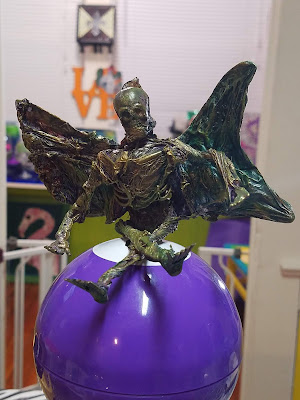 Let me know how your dead fairies come out! 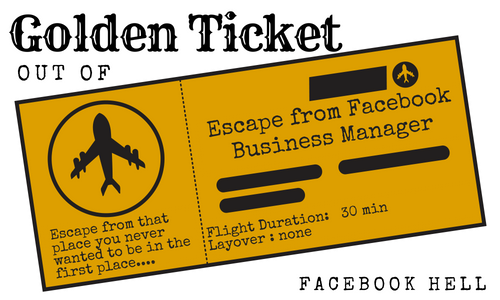 Are you stuck in Facebook Business Manager and you want out? Try this.